Erdogan attempts to rile up Muslims in Pakistan over Kashmir 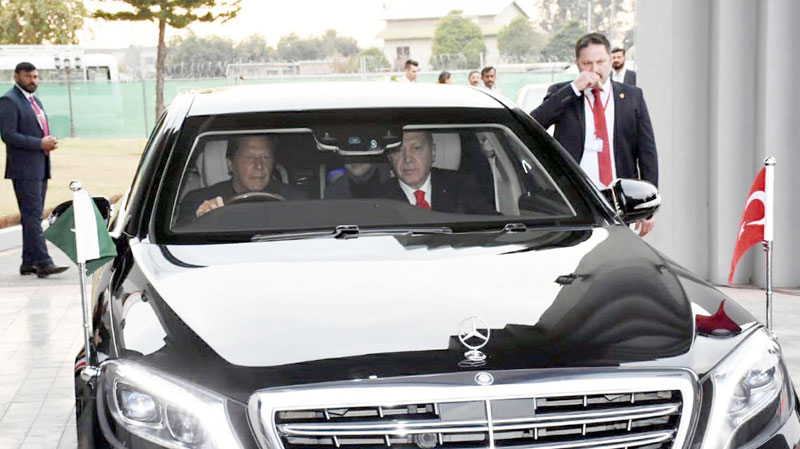 "Our Kashmiri brothers and sisters have suffered from inconveniences for decades and these sufferings have become graver due to unilateral steps taken in recent times", Erdogan said, apparently referring to India revoking the special status of Jammu and Kashmir in August previous year. "We will be supporting Pakistan at the Financial Action Task Force meetings, where Pakistan is subject to political pressure", he said. The visit comes at a time when Pakistan is trying to control damage following its absence from the Kuala Lumpur Islamic summit in December past year.

The Financial Action Task Force (FATF), which tackles money laundering, told Islamabad late past year that it could face blacklisting if it continued to apply inadequate controls over terrorism financing. "Turkey is standing with Pakistan and it will always support it".

In his concluding remarks, PM Imran thanked the Turkish president for his visit.

Turkey, China and Malaysia have been critical of India's move to integrate Kashmir with the rest of the country whereas the rest of the worldwide community have largely accepted the situation though they have voiced concern over the restrictions on communication in place since August.

The Turkey president said his country would continue to "raise its voice" in "Indian occupied Kashmir" stating, "How can we forget those from Pakistan who prayed for Turkey".

"Economic progress is not achieved in some days".

Pakistani President Arif Alvi on February 13 hosted a reception in honor of his Turkish counterpart Recep Tayyip Erdoğan in the capital Islamabad. It is necessary to work hard for this to act in a planned way with perseverance, faith and confidence.

"I salute Pakistan's efforts against terrorism".

The Turkish president said inking of the agreements reflected the importance of the relationship between the two countries, adding that the two countries had agreed to bring the bilateral trade volume to $5 billion.

According to a report on the website of Pakistan's "The News", "President Erdogan maintained that Kashmir problem could be solved only on just and equitable basis rather than through conflict and oppression and such a solution will serve the benefits of all parties".

Earlier on Thursday, Pakistan and Turkey agreed to extend mutual support on issues of each other's core national interest and underscored the importance of fully realizing the enormous potential of relationship between the two countries. National anthems of the two countries were also played on the occasion.

The understanding was reached at meeting between President Dr Arif Alvi and his Turkish Counterpart Recep Tayyip Erdogan in Islamabad. He stressed that the world community should extend its help in Afghanistan's post-conflict reconstruction.

President Erdogan said Pakistan is heading in the right direction in its journey towards development and mentioned that the tough road to prosperity requires determination, faith and struggle as main ingredients.

First coronavirus death outside Asia as China toll leaps past 1,500