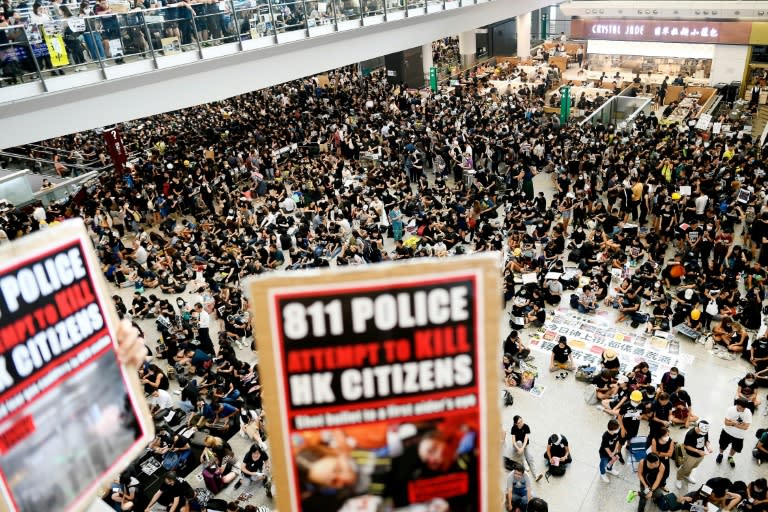 Thousands of people remain at the airport which is one of the world's largest worldwide terminals, BBC reports.

The protests were sparked in response to a government proposal that would have allowed the transfer of fugitives to mainland China, but soon spiraled into a larger movement demanding more democracy in the semi-autonomous region of China. "The recovery may take a long time", she said.

Airport staff advised passengers to leave the airport for their own safety, but traffic outside was at a near standstill, and public transportation was clogged.

The country has experienced more than two months of mass protests calling for democratic reforms and an independent inquiry into police conduct.

During a general strike on Monday, more than 100 flights were cancelled because airline and airport employees were participating in the protest.

"The situation in Hong Kong in the past week has made me very anxious that we have reached [a] risky situation", said Ms Lam, according to AFP news agency.

She said violence by protesters had pushed Hong Kong into "a state of panic and chaos". "We certainly call on China to be very careful and very respectful in how it deals with people who have legitimate concerns in Hong Kong".

The airport was the latest focus of protests that began two months ago.

A crowd of protesters that authorities said numbered more than 5,000 descended on the airport yesterday carrying placards and chanting slogans about police violence.

"So if you are travelling in or out of Hong Kong, you should check with your airline or the Hong Kong airport website to confirm whether there are any cancellations or delays". Seventy belong to the Hong Kong legislature and the rest represent different sectors like business and agriculture.

Canada's prime minister also said he's deeply concerned about how the situation is unfolding in Hong Kong and called on China to "respectfully treat those Hong Kong citizens or the demonstrators who have reasonable concerns" toward the government bill. In a sharp escalation of rhetoric used to describe the unrest, Guang said the "radical protesters" were committing serious crimes and "starting to plant the seeds of terrorism".

Another protester, who identified herself only as Bea, said she took the day off from work to express her outrage because "I feel that I have to do something".

"I feel that I have to do something".