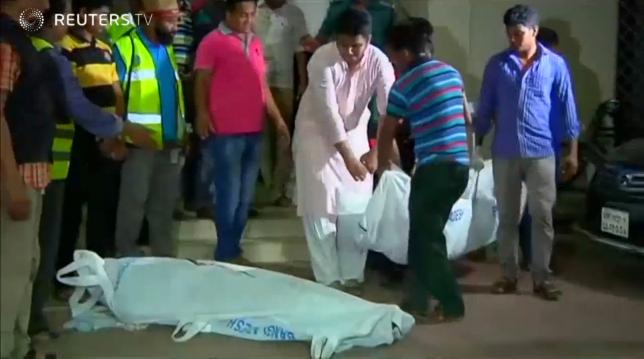 Bangladesh police said Monday they have arrested more than 8,000 people in a nationwide crackdown on militants launched after a series of murders targeting minorities and secular activists.

Those arrested include 37 suspected "Islamist militants" and hundreds of potential criminals who previously had warrants out against them, as well as several hundred ordinary arrests, Bangladeshi police said on Saturday.

All arrests were made on charges relating to firearms, narcotics and other offenses, national police chief AKM Shahidul Hoque said.

Police said members of the banned group Jamayetul Mujahideen Bangladesh (JMB) were among the arrestees in the latest security sweep.

Bangladesh's Prime Minister Sheikh Hasina said Saturday that she wanted to bring all of the perpetrators to justice.

On Friday, a Hindu monastery worker was hacked to death in the northwestern district of Pabna.

Mahmuda's murder is strikingly similar to the attacks carried out by suspected Islamist militants on secular writers, bloggers, online activists and people who have differing religious views. The police officer had planned and led raids on Islamist militant groups and the killing of his wife was seen as revenge by these militants.

Reiterating her government commitment to arrest the killers of all secret killings, she said, "Where the criminals will hide in?"

JMB is one of two local groups blamed for most of the recent killings.

The wave of suspected militant attacks since past year, which has left more than 30 dead, has put Bangladesh in the spotlight in the global arena. However, the government has dismissed such concerns, the Wall Street Journal reported.

Hindus and Christians make up about 10 percent of Bangladesh's 160 million population.

Local media, citing the USA -based SITE Intelligence Group, has reported that responsibility for most attacks has been claimed by either the terrorist Daesh group or al-Qaeda.

The bloodthirsty extremists also claimed responsibility for the hacking to death of Hindu priest Ananta Gopal Ganguly, 70, saying that its "soldiers of the caliphate" were behind the murder.

Nearly all the attacks have been claimed by transnational Islamist extremist groups, including the Islamic State group and al-Qaida affiliates.

Dhaka denies that militant groups such as Islamic State and al Qaeda are operating in Bangladesh, instead blaming the opposition for orchestrating the violence.